It is with great sadness that I share news of my old friend David Hughes who suffered a stroke earlier in May and died in hospital yesterday, 2nd June at the age of 76. 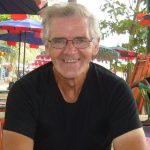 Born in Newbridge, Caerphilly, the ultimate Jack of all Trades started his working life as a coal miner and became an accomplished trombonist, keyboard player, writer, gardening expert, conductor, boxer and wrestler! David lived in the South East of England for many years and was associated with several bands in the area including working with Uckfield Concert Brass, Oxted, Horsham and Mid Sussex Brass as Musical Director. Well known for his wit and enthusiasm, David was also a talented composer and arranger; his music can be found in many band libraries and his sublime arrangement of Ave Maria as a cornet section feature was recorded by Black Dyke on their CD ‘Revelations’.

David spent the last 8 years of his life in Pattaya, Thailand, but he kept in close touch with his friends back in Britain and continued to write and arrange music for brass. He also supported a number of tours by the Desford band to his new home town. David will be laid to rest in a Thai funeral.

David will be fondly remembered as a strong character and great musician, a Welshman with music in his heart and fire in his soul. Our thoughts and deepest sympathies go to David’s wife Nuch and his family and friends at this sad time.